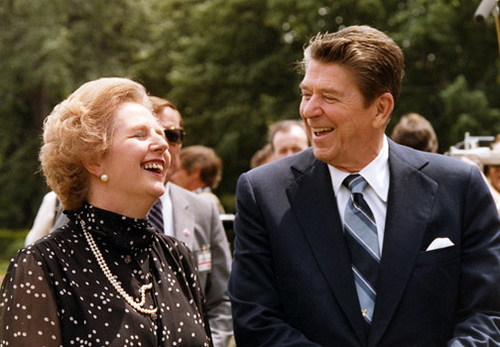 Maggie, there will be Presidents who will only wish they could measure up to this administration? photo by ROBERT HUFFSTUTTER is licensed under CC BY-NC 2.0
Maggie & Ronnie: a meeting of conservatism's earthly gods.

Ireland, The United States, Canada, Australia, New Zealand and more: international victims of a Whiz-bang Goddess of Conservatism — Margaret Thatcher, Prime Minister of the United Kingdom from 1979 to 1990.

“Thatcherism” offered music to ears tilted towards the right side of political hearing. A sampler:

We could go on.

Thirty years after Thatcher, international governments are still following many of Thatcher’s iron-fisted prescriptions for national health. But closer to home, Thatcher would seem to be falling victim to a famous saying: “no man is a hero in his own country.”

Putting it bluntly, there is an emerging view that Thatcher was a scam-artist — a leader parading forwards even unto war while spouting principles that she did not in fact follow herself, and nor did the government she led.

A lengthy article in The Guardian calls out this right-wing goddess, still sitting high on her pedestal overseas. It makes for interesting, if colloquial, reading in other countries. Unfortunately local Brit-speak abounds in the following article. It may require frequent trips to Wikipedia or elsewhere to decipher this unexplained expression or that incomprehensible acronym. We reckon it’s worth it.

Read more in The Guardian: Thatcherism is the big Tory scam that still distorts our politics

LEAVE A REPLY (Only a name is needed) Cancel reply

This site uses Akismet to reduce spam. Learn how your comment data is processed.